“If you take out the physics from all your computing method, you have to put it back as soon as you want to control some physical system”
By Christopher Senn 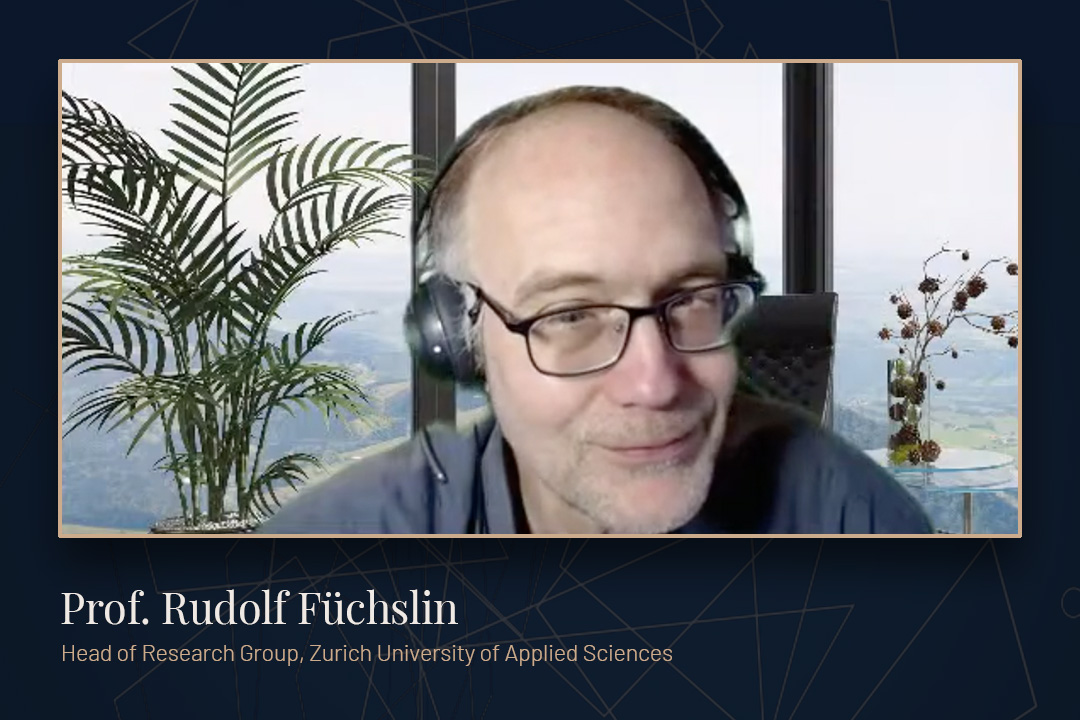 For Cross Roads #21, we had the honor of hosting Prof. Rudolf Marcel Füchslin for a talk on “Morphological Computation and Control in Robotics, Chemistry and Medicine”. Ruedi is the head of the Applied Complex Systems research group at the Institute of Applied Mathematics and Physics of the Zurich University of Applied Sciences in Winterthur, Switzerland. Working in applied sciences, as he does, means facing the daily challenge that the transfer from fundamental to applied science is not always easy, as in fundamental sciences systems tend to be simplified and isolated; whereas in an applied setting we have to deal with additional complex interactions, as it’s usually not feasible to isolate them.

“Separating hardware and software comes at a price: If you take out all physics from your computing method, you have to put it back, if you want to control a physical system.”

This brings us to his main claim: “Separating hardware and software comes at a price: If you take out all physics from your computing method, you have to put it back, if you want to control a physical system.” With classical approaches in control theory, this means adding lots of maths describing the system we want to control, but do we have to? In fact, it is possible to bring physics into our models by using physics.

Robotics is a good example for this. In the conventional approach we translate the sensory input to a digital representation of the world, do our computations with this representation, and then translate it back to the real world through the actuator control. Unfortunately, handling physical dynamics in a digital world is difficult, as we have to deal with noise amongst others. By making robots stiff and heavy, we can limit this influence, but morphological control gives us another way out. By making the enemy our friend, or rather rephrasing the term noise to physical dynamics, we can exploit it as a resource for computation. This can drastically reduce the complexity of our digital controller.

Looking at biology, or more specifically gait patterns of horses, we can get an idea on how the morphology can support the control of a process. The question arises how the different gaits – walk, trot, canter and gallop – are controlled. Is it only the brain? Or is there something else taking part in the controlling of the gait? As the horse is a physical dynamical system, it has attractors, or basins of attraction, representing the different gaits. This implies that the brain only has to choose which basin it wants to use, the body – dynamical system – of the horse will then do the rest.

Even when looking at our own movement, we see something similar. As Thomas Schack and Helge Ritter have found in 2009, when training we train for sports, what we actually do is change our attractor landscape – or posture – to optimally support the movement. “What I actually do when I train for downhill skiing, is not to learn how to react to all these little bumps [...] but I learn how to bring my body in such a posture that, if I encounter a little bump in the slope [...] that it’s easy to react to that”, thus, according to Ruedi, the body dynamics take care of most of the necessary reactions.

But there is a trade-off to be considered, namely between programmable or portability and specific function or importance of embodiment, think of a phillips screwdriver vs. a turing machine. The turing machine is, in theory, capable of solving anything computable, whereas the Phillips screwdriver can only be used for Phillips screws. Morphological computing can be placed in between these two as an attempt to explore this space. It’s not universally programmable, but it offers some programmability.

For humans this becomes tangible when we look at aging, as we grow older, it becomes more difficult to control our bodies. Of course some people might attribute this to becoming “dumber”, but a better explanation is given when looking at our attractor landscape and how it becomes more complicated, and thus making it more difficult to control, as we age. Since we can’t rejuvenate our bodies yet, we can try to support our body dynamics instead. Wobbly knees for example, we can use a mechanical system to help stabilize and support the knee dynamics using a simple pneumatic system.

So far we have spoken only about clever engineering, not about computation directly. But as Helmut Hause has shown, having a sufficiently complex mechanical system, and a simple feed-forward neural network, we are able to compute large classes of filters. Coming back to robotics, this can be applied in the form of soft robots, by directly exploiting the dynamics of compliant materials – conventionally we’d want to use stiff systems, with few free variables - as a resource.

Now on to the topic of chemistry – as promised by the title of the talk – cells can be interpreted as dynamical networks of physicochemical interactions. Such networks are again controlled by its internal dynamics, implying different kinds of diseases. For one, nodes can be dysfunctional, e.g. due to mutations, which can affect the functionality of the whole network. Or the cell can be in the wrong basin of attraction. This systemic view is directly applied by Ruedis laboratory in the treatment of cancer cells. By heating cells up before irradiation we can increase the effectiveness of cancer treatments.

Going further to chemical processes, by compartmentalizing chemical setups, the whole process becomes “programmable” using the physical arrangement of the compartments. Allowing for better control and optimization of the chemical interactions. ACDC, a current European project, is exploring this idea, and also tries to bridge the gap between experimental and artificial chemistry – or as Ruedi puts it: “What can be done and what is done, and [...] what could be done if certain conditions were given”.

Moving to another topic – the evolution of digital circuits. Binary multipliers, even for small numbers of bits like 5- or 6-bits, are almost impossible to evolve. So there must be something missing, as it turns out when looking at digital circuits, we see that their geometrical arrangement somehow encodes information about what they are supposed to do. This led to Ruedis work on self-assembling digital circuitry. Allowing for scalable multipliers through an evolutionary process, albeit virtual, but not limited to multipliers alone.

Jumping to the end, he tackles the question “The End of Theory?” or in his words: “Is it the case that data science makes modelling obsolete?”. Even if we have heaps of data, a good model can still help you avoid disasters, and get over the mountain of data, to the sunny side of science :) Models in general play an important role in actually understanding and explaining what we are talking about, be it in the past, present or future or help us to produce even more data.